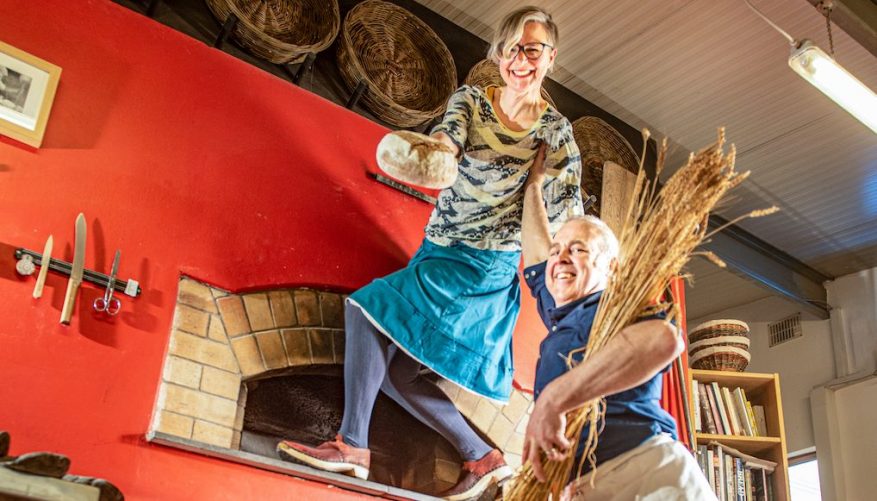 Julie Lockett and Joe Fitzmaurice run multi-award-winning Riot Rye Bakehouse, Bread School & Store which is located at the front of their house in the ecovillage. They got involved in the project in 2005 and moved here from inner city Dublin in 2011 with their 2 sons, then aged 3 and 5.

Julie visited another ecovillage – Findhorn Foundation Community in Scotland in 2004 and was inspired when she saw a different way of living before her very eyes! Joe and Julie were starting a family and Julie was really impressed with how confident and free-range the children were in Findhorn and so they decided to raise their family in an ecovillage.

Julie and Joe worked with Solearth Architecture to design their house and bakery, then they organised for a local builder to build their house. Once they’d moved in, Joe built their highly energy efficient, Alan Scott wood-fired oven and bakery with a friend. Joe’s previous bakery in Dublin was highly energy intensive. Their oven is fuelled with thinnings from local broadleaf forests and sustainably managed woodlands. They supply the local community with organic sourdough breads and run a Bread Club. Joe is a co-founder of Real Bread Ireland which supports small-scale, independent bakeries nationally.

Julie is a dance artist and associate artist with Cloughjordan Circus Club which her sons also attend. She conducts educational tours and talks for schools and universities visiting the ecovillage. Joe commutes to Dublin by train once a week where he works with his sisters in their food business: Blazing Salads and Flip vegetarian burger bar. He has an allotment and is currently growing evolutionary, mixed-population Scandanavian rye grain. Their sons attend the local secondary school and are members of scouts, Cloughjordan Kick-boxing Club and help out with bread deliveries and packing in the bakery.

Joe and Julie are farm members, car share with neighbours and enjoy working alongside and supporting as many local businesses, food producers and artists as they can! They enjoy living in a dynamic, rural community and are excited for the future of Cloughjordan.

One day, Pa Finucane decided that city living wasn’t for him any […]